2013 Humanitarians of the Year: John Frisch and Jeff Einhorn

The Niello Company sponsored the Foundation for UCP of Sacramento and Northern California at the Hyatt Regency in downtown Sacramento on May 16th in honoring 2013 Humanitarians of the Year: John Frisch (Cornish & Carey Commercial / Newmark Knight Frank) and Jeff Einhorn (NonProfits’ United). The Humanitarian of the Year Award is an annual award given to individuals or organizations who have displayed a passion for life and a sincere desire to work toward enhancing the lives of others. The emotional evening included a silent auction, a special welcome by the Masters of Ceremonies (Dave Bender and Christina Anderson of CBS13), a formal dinner for the supporting sponsors and guests of honor, and a presentation of the state of UCP (United Cerebral Palsy) by Doug Bergman, President & CEO of UCP of Sacramento and Northern California. Doug’s message focused on the importance of raising both awareness and funds for organizations such as UCP, and the impact this has in our community. This celebration of honoring Sacramento’s most elite humanitarians has continued for the last 20 years. The Niello Company proudly honors Jeff Einhorn and John Frisch for their contributions to the Sacramento community.

A live auction immediately followed Doug Bergman’s introduction, filling a humbled crowd with motivation to (as the auctioneer put it) “raise some serious cash for a wonderful cause.” The auction started with hands in the air for those willing to donate cash in $5,000, $2,500, $1,000, $500, $250 and $100 increments. While there were no takers in the $5,000 range, there was a lone $2,500 donation, a dozen $1,000 offers, followed by an exponentially-growing amount of hands raised for the $500, $250 and $100 amounts. Cash donations alone tallied over $25,000. The momentum continued with live-auctioned items, including limo trips and box seats to see the San Francisco Giants, a dinner for 10 with Taro of Mikuni Sushi, and a 2013 Honda Fit. Sacramento apparently loves the Giants, because a trip for 10 raised $3,000 and a second trip for 16 raised $4,000, for a $7,000 total.  Sacramento also loves sushi. Midway through a dinner for 10 bidding war, Taro and company upped the meal to a dinner for 20, which raised $2,600. But this wasn’t enough. Taro and company then offered a second dinner for 20, which raised another $2,600, for a total of $5,200 by the two hungry bidders. The live auction concluded with the 2013 Honda Fit, which quickly climbed to $13,750. Who was the bidder? None other than Taro. Live-auctioned items tallied nearly $26,000. 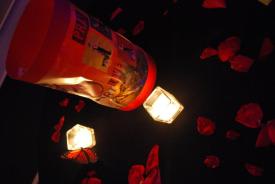 Table Decorations at the Hyatt Regency

Considering the $25,000 in cash donations, $26,000 in live-auctioned items, over $20,000 in silent-auctioned items, money raised by 56 sponsor tables, and the amounts donated by the Presenting, Crystal, Gold, Silver and Bronze sponsors, the math adds up quickly. Grand tally for the night? Over $306,000. The importance of company involvement in raising money for organizations such as UCP of Sacramento, and sponsoring events like the Humanitarian of the Year Award Dinner, could not be more justified. 2013 marked the most successful event on record for UCP of Sacramento. 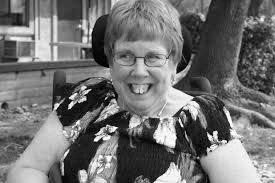 Shawn Harr, one of UCP’s amazing success stories, presented a special message for the evening. Shawn had lived with her sister in Fair Oaks before deciding she no longer wanted to be dependent on her family, and that a time for change was in order. “At the age of 55, she decided to live on her own for the first time in her life” thanks to UCP’s CLASP independent living program, which teaches those with developmental disabilities skills necessary to live independently. In early 2011, Shawn moved into her own apartment in Sacramento, where she has learned to balance a budget, grocery shop, and has also developed a passion for cooking. “I guess I have a lot more confidence than I thought,” she said. Shawn Harr’s emotional story is only one of many.

The night concluded with a tribute to Jeff Einhorn and John Frisch, a special message from each, and the Humanitarian of the Year Award presentation.