While many of the Niello locations have a long history, each facility is factory compliant and dedicated to the brand. Each location is remodeled through the years as factory requirements and brand appearances change. There is no “dualing” at any of the locations. Eleven of The Niello Company’s state-of-the-art buildings are located are in the greater Sacramento region and the twelfth is in Concord, California. 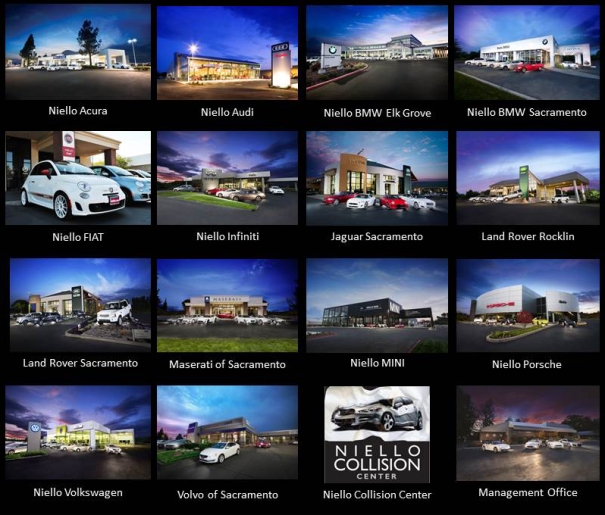 The current Niello Volkswagen building, originally constructed in 1969 after the split from Niello-Lasher Volkswagen, went through a complete remodel in 2003, and has stayed consistent with Volkswagen standards in exterior and interior design since inception.

Niello Acura joined The Niello Company in 1990, living on Madison Ave. for 10 years, and recently moved locations to the Roseville Auto Mall.

Niello Infiniti in Concord, originally constructed in 1982, recently went through remodels of the business office, sales floor, service department, customer waiting area, as well as an addition of a new Business Development Center (2003, 2012).

Niello BMW Sacramento, originally built in 1986, was remodeled in 2000; its neighbor at the time, Niello MINI, moved to a brand new, state-of-the-art building on Auburn Blvd in 2014.

Niello Collision Service, on the same lot as Niello Volkswagen, was built in 2000. The building used for the customer service center of the Body Shop went through a complete building remodel (from the ground up) in 2008.

Some of the more recent brands represented by The Niello Company are housed in facilities built from the ground up. This includes Land Rover Rocklin (2002), Niello Porsche (2005), Niello Audi (2006), and the second BMW dealership, Niello BMW Elk Grove (2008), which is the first satellite BMW dealership in California, and only one of a few in the nation.

The centrally located corporate office was established at the end of 2005, remodeled from a building originally constructed in 1977. The office is close to a vehicle storage facility with 91,220 square feet of additional vehicle storage for the various dealerships, originally built in 1952.

In 2013, Niello FIAT opened their doors in the same building as Maserati of Sacramento. Construction is finishing up on a beautiful new Maserati dealership on Arden Way, complete with a showroom and service department for both Maserati and FIAT.

Niello Volvo of Sacramento is the most recent brand acquired by The Niello Company, and moved in to their current location on Madison Avenue in December 2014.